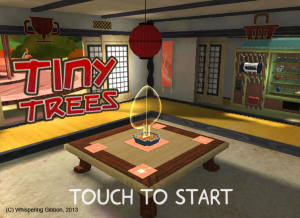 I worked at Whispering Gibbon for ten weeks, working on their Tiny Trees project. The game allows players to raise and nurture bonsai trees in an effort to regenerate a garden that the player finds themselves in possession of. Players can also interact socially, sharing their best trees with their friends and encouraging competition.

At the time of working at Whispering Gibbon, the company were part of the 2013 London Microsoft Ventures Accelerator and my work at the company was vital in helping them push forward with the project as they juggled business with development. During this period, the company were also featured in an issue of Develop magazine. Read the article here: http://www.develop-online.net/tools-and-tech/microsoft-spotlight-whispering-gibbon-s-studio-accelerator-experience/0186795

As part of the team I worked on several sections of the game, preparing, developing and adding to the design of the central gameplay mechanics and developing the underlying state systems so that the project could be shown effectively to investors. While aspects of the game will inevitably change over the development lifetime, many of the principles that I worked on will remain as the core of the game. I also carried out work on the UI and testing the game on Android devices. I also provided feedback on game design as well as offering suggestions, making my mark on the development of the project.

From my time at Whispering Gibbon I see them as a strong indie developer with a promising idea that offers something different from apps that currently exist with the theme of growing your own bonsai trees.

As this is a commercial product, please refer to the project link above, or contact joe.stevens@whisperinggibbon.com for a reference or more information. Screenshot represents a product currently in development and may not reflect the final version. Tiny Trees and related media (C) Whispering Gibbon, 2013.